Values-based practice in Malawi: a field report from 4 weeks of teaching in May/June 2012 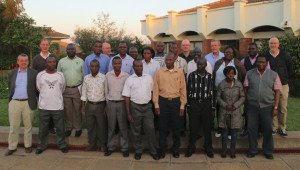 Background: the Clinical Officer in Malawi
A clinical officer (CO) has had 3 years diploma training and then works in a highly responsible position undertaking full medical and surgical care for their population, usually working with one or two CO colleagues, and often with one medically trained (District Medical Officer) DMO at the hospital (usually less experienced than but senior to the COs) they provide obstetric, paediatric, medical, psychiatric, trauma, orthopaedic, general surgical, anaesthetic and any other care you can think of! They get very little CPD and they are, as a senior civil servant from the department of health has explained, very under-recognised. COs are crucial to the Malawian health system. Unlike doctors, they are unlikely to emigrate, but still there is a high attrition rate as they lack opportunities for personal development and personal advancement for which they are hungry.

The ETATMBA project: “Enhancing Human Resources and Use of Appropriate Technologies for Maternal and Perinatal Survival In Sub-Saharan Africa”
Our teaching on obstetric and neonatal care in this EC funded project is comprised of modules accredited by University of Warwick at BSc level. This is important as the COs are desperate to get a degree. There is a critical shortage of Malawian faculty able to develop and teach on this sort of course. Currently, we have a strong European faculty, mostly from University of Warwick, working with, and gradually handing over to, a Malawian faculty. We are also working closely with the College of Medicine in the University of Malawi to help them develop a BSc Course for CO’s. The plan is that 6 specialist CO courses will be presented to the University en bloc. The 3 year courses will be for CO recognition in Obstetrics; Paediatrics; General Surgery; Anaesthetics; Orthopaedics and Trauma, and Medicine. They will have a common structure. Although some of the innovations on our course will get lost, there is much to be gained for the COs in having the level of recognition and support that only the Malawian College of Medicine can offer them. Only the brightest and best COs will get onto the degree courses, but there will be recognition for their experience.

The teaching in Context
The plan for the Warwick course in Malawi is in essence to take selected COs with a minimum of 3 years experience working in obstetrics and run three taught modules of one week at 6-monthly intervals followed by a professional project and specific on-the-job training. It is hoped to accredit this for a Warwick BSc. Following a successful pilot in Nkhotakota during May 2011 with half a dozen COs, a further 50 COs completed the first module in Lilongwe in November 2011 including a clinical audit assessment. The first module concentrated on theory and practice in obstetrics and neonatal care, with emphasis on the ‘Big 5’ killers: eclampsia, post-partum haemorrhage, anaemia, sepsis and neonatal asphyxia. Morning group sessions were followed by afternoon drills using simulation.

The second module, run during May/June 2012 in Lilongwe is our ‘Clinical service improvement and leadership in Emergency Obstetric and Neonatal Care’ module, which takes the students’ clinical audits as the starting point and works on change management, evidence-based practice and values-based practice (V-BP), clinical leadership and clinical systems improvement. The module runs over 5 days and is repeated 4 times. Each week, around 13 COs are joined by 4 nurse midwives. Learning is related to the clinical situation, and tested at the end of the week by an OSCE exam (30%) and a clinical leadership self-assessment, action plan, and evidenced portfolio of achievement, plus completion of the clinical audit cycle (70%).

The next course in 6 months time will comprise practical and theoretical training around the WHO/Gates Foundation project on preventing pre-term birth.

Values –Based practice in context.
One of the theme days in module two was V-BP. A brief introduction to V-BP is followed by teaching on the clinical skills of values-awareness, values- reasoning, knowledge of values and values-based communication. Much is based on vignettes of 3 pregnant Malawian women, and the students are able to think about the values communication and values awareness, including using their own awareness, to get in touch with their own values around pregnancy and fertility.

The three scenarios, each involving pregnancy, are a 14-year-old girl, a 25-year-old woman who has had difficulty conceiving, and a 42-year-old woman with 7 children and a complex obstetric history including stillbirths. Students are invited to consider what would be the first thing they would say to each woman. In each of the 4 weeks of teaching one of the dominant first questions asked of each woman would be ‘are you married?’. It became clear that whether or not a woman was married would influence how a CO thought about a patient, despite claims that it would not necessarily affect the management plan for each woman. The cultural values surrounding marriage were important to these students. Through group discussion students were able to see how their own values can create an impression of a patient before the facts of a case, not to mention the patient’s own values, have been sought. When asked how the students thought the patient would feel by this as an opening question in the consultation, some volunteered that the patient might feel they were being judged by the clinician’s question. Discussion around alternative opening questions including how the woman in each scenario can be encouraged to say how they feel about their pregnancy would allow the clinician to quickly gain an understanding of the values of each of the women including what their ideas, concerns and expectations were for their pregnancy. Asking open rather than closed questions that focussed on how each woman felt would yield more information and establish a positive relationship between clinician and patient, and allow shared decision making about the management of each pregnancy in a framework of shared values.

The student’s own values were further seen to be in conflict when they are led by Dr Chisale Mhango (Malawian obstetrician) into a scenario of a heavily bleeding woman and they voice the values of needing to save life. However, when they are taken on to the point where they discover a stick in the vagina (indicating an illegal abortion), their values are far less clear.

We also managed to expose a lack of knowledge about Malawian traditional values, as students from North Malawian backgrounds were as unsure about the values around teenage pregnancy in the South as the Southerners were about values around fertility in the North. Much fun was had with serious learning about the implications of patrilineal vs matrilineal values that are likely to have implications for both female literacy and maternal mortality rates.

Further values-based scenarios involving some role-play enabled us to explore person-values-centred practice in some detail, alongside values-based teamworking.

The big strength of teaching on this weeklong course was that on the faculty entered into the spirit of V-BP and referred to it constantly, emphasising values dimensions again and again. This was enormously useful in embedding the learning and we had gratifying comments from learners, including one who commented to a tutor, ‘Values –basing is going to change my whole practice.’

V-BP was tested extensively in 4/5 OSCE’s and results indicated good understanding. Students are now engaged with independent learning, during which they will put into practice what they have learnt following the teaching.

Case study: A typical night shift for a Malawian clinical officer
W is a very experienced student who completed the course on Friday. I saw him at coffee-time today, Sunday, when he returned to talk to faculty and students. He came up to me and said that he had been on call on Friday night and had already found V-BP useful. Somewhat distracted by preparing for the next session, I expressed my thanks and moved on. One of my colleagues took the time to find out more about his night shift that he described as ‘typical’. Overnight he had performed 7 Caesarean sections and 3 uterine evacuations. He attended one maternal death and one neonatal death in the busy Lilongwe hospital.

This site uses Akismet to reduce spam. Learn how your comment data is processed.